History of the Borough of Mount Pocono

Early records show settlement at Tobyhanna Mills (now Tobyhanna) and along the Easton and Belmont Turnpike (now Route 196) from the cross roads…northward. A map of Monroe County dated 1860 shows…three houses and a post office/store at the crossroads. By 1875…the present Borough location had a railroad depot, two hotels, few houses and the post office had moved near the railroad depot. From the modest beginning of two hotels about 1875…it was not surprising to find ten thriving resorts plus a number of guest homes at Mount Pocono, PA., in the mid 1900’s with numerous other resorts within easy traveling distance around the community. Tourism had indeed become the chief industry of Mount Pocono. 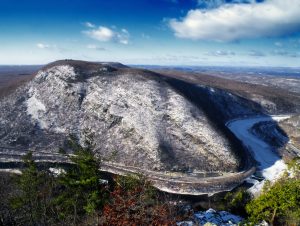 Although the large hotel and boarding house business waned significantly as the twentieth century progressed, the Pocono’s were “rediscovered” in the late 1960’s when the second home development era began. The development of the interstate highway system into the Poconos more than compensated for the loss of mobility due to the demise of passenger rail service. While most of the development occurred in the municipalities surrounding the Borough, Mount Pocono has undergone a significant change in community character as a result of the second home boom. The increase in commercial activity and the number of housing units since 1970 has been dramatic with the number of housing units increasing from 478 to 1,341. More recently, families are settling permanently in the region and the Borough, with many heads of households commuting outside the area to work. The diverse population of the Borough has grown to 3,096 according to the 2010 census.

The Borough Administration and the residents of Mount Pocono take great pride in their small town, making it a great place to live, to shop, conduct business or to just visit. Mount Pocono Borough located at the highest elevation in Monroe County is just minutes from many Pocono activities such as: Pocono Raceway, Camelback Ski Area, Mt. Airy Casino, The Crossings Premium Outlet, and many one of a kind shops, movie theatre, many water parks, whitewater rafting, hiking, horseback riding, great views and even a Pocono Rodeo every Saturday.

Historically the Borough building was originally built as a school in the 1899 and the Borough purchased the building from the Pocono Mountain School District in 1961 for $1.00. The building was renovated in 1994-1995 to its current state which houses the Borough offices and the Municipal Authority. Not forgetting the history of the building the Borough proudly exhibits a small classroom and photos of children who attended the school. The Monroe County Historical Society awarded to the Mount Pocono Borough Municipal Building the 2013 Preserve, Enhance, Promote Historic Preservation Award for Publically Funded Property.